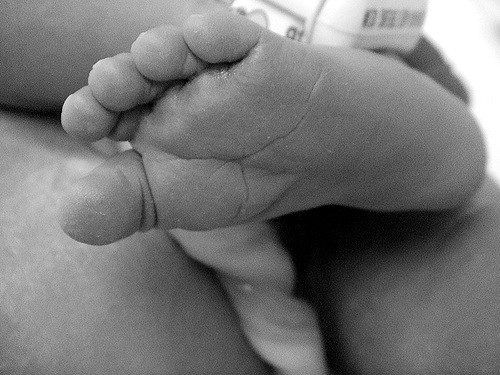 “They said it would be a while,” announced the young man, as he came through the apartment door. “I gave the nurses your number – I figured I could wait here just as good as at the hospital, since it’s so close.”

“Yes, that’s true!” beamed his mother, closing the door behind him. “I’m so glad you came!”

The young man’s father nodded from the table. “You’re just in time for strawberry shortcake. Come have a bite.”

The young man seated himself at the table while his mother dished up another serving of shortcake topped with freshly-whipped cream. He’d hardly tasted it when the telephone rang. He froze – it couldn’t be the hospital, could it?

His mother darted to the phone: “Hello? Yes … yes he is.”

She held the receiver out to him.

Was something wrong? Despite the juicy strawberries, his mouth was dry as he took the phone.

“Congratulations!” said the chipper nurse on the other end. “You have a daughter! Mother and baby are doing fine.”

He managed to thank the nurse. He hung up and looked into the rapt blue eyes of his parents.

His mother hugged him. She began to cry.

In a flurry, they gathered the dishes and set them in the sink. His mother took off her apron and grabbed her pocketbook. His father put on his black cap, and the three of them fairly scrambled out of the kitchen door and down the back stairs.

His mother-in-law and sister-in-law were standing at the nursery window when the young man arrived with his parents in tow.

Said his sister-in-law: “It’s a girl – finally!” She sounded almost wistful, having no children of her own.

Turning to hug the young man, his mother-in-law said: “Looka there – a granddaughter, after five grandsons! I thought this baby might come fast. All of my mine did.”

“Mine did, too,” said the young man’s mother, dabbing her eyes with a tissue.

The mother-in-law took her by the arm.”Come up close and see your first grandbaby.” And she stepped back to let the new grandmother near the nursery window.

“Ohhhh,” whispered the young man’s mother, gazing through the glass. “She looks just like a little angel.” Tears streamed down her cheeks, unabated.

Her son, the brand-new father, peered through the glass beside her, frowning. He hadn’t known exactly what to expect, but one thing was for sure – the newborn wasn’t pretty. “Good Lord. She looks just like Daddy.”

Everyone laughed at that. It was true – the wrinkly, ruddy newborn had hardly any hair and looked like a little old man – indeed the image of her granddaddy, who beheld her silently, smiling, his heart bursting with pride. He thought of the twenty silver dollars he’d collected  for his first grandchild. One day when this baby was old enough, he’d give them to her.

The in-laws congratulated each other on one side of the glass as the baby slept soundly on the other, while somewhere in the bowels of the hospital, the baby’s mother wanted to know when she was getting some supper, since the baby’s arrival had preempted it.

Thus was I born, that long-ago evening in May, strawberry season, in the city, when fathers were relegated to waiting rooms instead of witnessing and participating in births, before Cool Whip was even invented – alas.

As the day rolls around yet again, with every celebrant who gathered at the nursery window long passed on, it occurs to me that knowing the story of my birth is a gift. It ranks high, priceless, among all the gifts given me over a lifetime. I owe this mostly to my grandmother, a tireless storyteller, and some to her son, my father, who, in his matter-of-fact way, told me that my mother grumbled about missing her supper and that newborns aren’t pretty – not even his own! He made a similar observation at the funeral of his father – my grandfather – as we stood by the casket. “He looks really good,” I said, stroking Granddaddy’s snow-white hair for the last time, marveling at the smoothness of his skin. My father frowned: “I don’t know why people say that. Corpses don’t look good.”

Nevertheless, I cherish my birth narrative as told by those who were there.

Tonight I celebrate them and their truths, their personalities, their wit, their lives – and their stories, which allow me to see events from their perspectives. Tonight, for just a moment, I am at the window, watching through their eyes, when I am born.

The fascinating reciprocal, of course, is that because of their stories, they live on through mine.

Reflection: Do you know your birth – or adoption – narrative? If you do, write it down! If you don’t, ask, if possible. If not possible, well, that’s a powerful story in itself. Explore your beginning, experiment with perspective  – and write. And, by all means, if you know the birth stories of others – tell them.