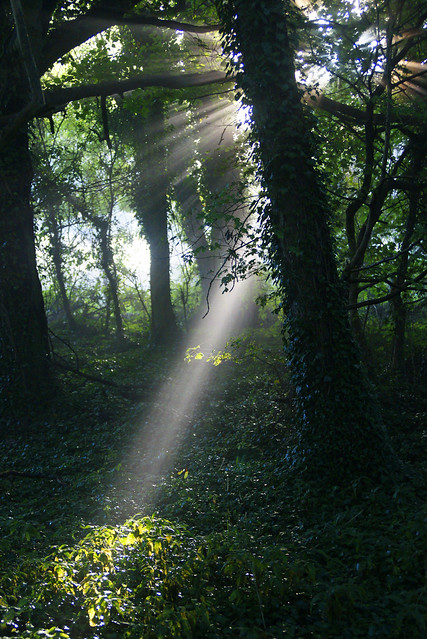 Ray of light. Kumweni. CC BY

Sunlight. Blinding. Hotter than I expect after a week ensconced deep in the techno-bowels of the hospital. The netherworld. A parallel universe of tiny details and proportions. I remember a book where characters forgot the sun, were told it didn’t exist, that it was something they’d imagined, but I can’t think about that now, I have to get my husband—so uncharacteristically frail and fragile—out of this blazing reality and into the doctor’s office.

—Just wait there by your side of the car, I am coming, I’m coming. . . . Hold my arm, take your time across the sidewalk. I know every step hurts. I’ve got the door. Lovely waiting room, isn’t it. Near-empty. Relief. Maybe the wait will not be long and we can go home. He can rest. Except that he can’t rest. Cardiac arrest isn’t as brutal as being resuscitated. There’s a painful price for being brought back to life . . . .

—Sit here. I’ll check in. Two women behind the counter, working on computers. The woman on the left reminds me of someone but the one on the right is asking a question. My husband. He was released from the hospital two days ago. We were told to follow up with his regular doctor within seven days, thanks for getting us in. This woman on the right nods her head. Her hair is very black, long, pulled back. Over her shoulder on the wall is a sketch of the Buddha with the words GOOD VIBES.

Our chairs face the TV. El Paso. A woman seated across the room by the windows, sunlight streaming in around her, looks at us: When will it stop.

The woman at the counter, on the left: It’s racism. Clear, emphatic voice. I know who she reminds me of, now. Queen Latifah. Yes. Same face and eyes, shoulder-length hair. Younger. Less celebrity-ish but exuding confidence. She continues: This country . . . .

The girl next to the woman in the waiting room shifts in her seat. Must be her daughter. Pretty girl, hair in a soft bob of loose curls. Poised. Hard to say how old. Sixteen, seventeen? They’re the only other people waiting.

Woman across the room (nodding): Yeah, they’re not black. We just shoot each other.

Queen Latifah look-alike: People don’t realize I am half black and half white. My birth certificate says Caucasian. My son is a lot darker and we can tell you plenty of stories about the different ways we’re treated . . . people don’t always know they’re doing it.

Me: Implicit bias. It takes a lot to go that deep in yourself, to see it.

The woman on the left with the Buddha over her shoulder on the wall hasn’t looked up nor said a word this whole time and I am thinking, in the end aren’t we all shades of each other, don’t we all bleed red, doesn’t it all flow from the same source if we trace it far enough back? My own largely Northwestern European  DNA carries a fragment of Nigeria from generations ago, a story I long to know. Human genetics shows we’re all descended from one woman in East Africa. Mitochondrial Eve. “The mother of all living.” Genesis 3:20.  My husband, a minister, is olive-skinned, a tiny percent Native American, although he’s awfully pale at present and the underside of both his arms is bruised solid black. We all bruise the same . . . .

The woman who reminds me of Queen L is speaking about needed changes and education, referencing a county nearby with a racist reputation; the woman across the rooms tells the story of her daughter’s car breaking down there, how her phone battery was dead, how she walked to a store at the crossroads and the white workers wouldn’t let her use their phones.

—I got back in the car and left it running, I charged my phone enough to call my mom, and I prayed.

I listen, heartsick. I do not say it but “that county” happens to be where my Grannie was raised. My Grannie, who took me to a store to buy a doll when I was really little. When I picked a black doll, she bought it for me. In the late 1960s. A white woman from “that county” . . . suddenly the girl’s mother smiles: But there are still good people everywhere. Thank God.

The front door opens. A man enters. He’s huge. Like an NFL player. Gripped in his big brown hand is a clear plastic jug of water; it gleams in a shaft of sunlight and I think Water of Life as another door from the medical side opens and a small man, black hair in a man bun, comes into the waiting area to greet him with a Spanish accent. They’re workers of some kind, dressed in similar gray shirts, khaki pants. They embrace each other and my mind is too weary anymore to wonder why, what the story is. I just marvel. This is how the world should be, like it is in this room, right now. Brotherly love, one human for another, kindred spirits. United in a common purpose. Heaven must be something like this.

As the men vanish (for I don’t notice how or where), the quiet woman on the left at the counter calls the lady and her daughter up. They’re finished with whatever it is for which they came. They’re free to go. The woman comes over to us on her way to the door: It is very nice meeting you. I wish you the best. My daughter, she’s going to college.

My husband reaches his hand, his bruised arm, out to her: It’s a pleasure.

She shakes his hand. There’s only one thing I know to do. I stand and hug the woman. Her embrace is warm, tight. Genuine. Her daughter stands by, smiling, so I hug her, too. She feels small in my arms. —All the best to you, too. One day I will see you on TV and you’ll be helping to fix all these things and I will remember that I saw you here.

Her smile widens. So radiant. —Maybe so.

I watch her go with a pang of hope, bright as the sunlight, when my husband’s name is called to check the progress of his repaired, restarted heart.

So much pain, yes.

Gonna be a long, long process.

Long, long ago, your mother sat by your hospital bed, not knowing if you would live or die. Acute bronchitis, emergency tracheotomy, impossibly high fever… I can almost envision your little four-year-old self inside the oxygen tent, packed in ice to get your temperature down, and your mother in the chair, wiping her tears as she wrote you a note. Her beautiful penmanship remains vivid on the inside cover of the Bible story book she bought for you:

When you are well and safe at home again, I’ll read you this little note I’ve written to you during the hours I sat by your bed and watched you sleep so soundly . . . Mommy and Daddy have been so scared . . . We love you so much, our little son . . . Little angels have been all around your bed since you have been sick and Jesus sent them to watch over you and keep you . . . soon all the suffering and fright you have had will pass from your little mind but Mommy will always remember and thank God for giving you back to me.

Five decades later, Dearest, I sit by your hospital bed, typing this note in my phone. When you are well and safe at home again I will tell you how the EMS responders were angels sent to save you, how the doctors repaired your heart, how the nurses watched over you and kept you safe, how – for the second time in your life – your body was chilled in an effort to save your brain. The boys and I have been here with you the whole time. At last you woke and knew us … we will always remember what the doctors said, that everything, everything aligned for you.

At 4:00 a.m. in the hospital – today and every hour of every day hereafter – we thank God for giving you back to us.

Update 8/6: After a week in the hospital, five days of which were in cardiac ICU, he is home. Weak, sore, struggling with memory, and amazed by his own story. We tell it to him over and over again.

Medical professionals continue to describe the actions of EMS responders – who administered CPR for twenty minutes with defibrillators – as “heroic.”