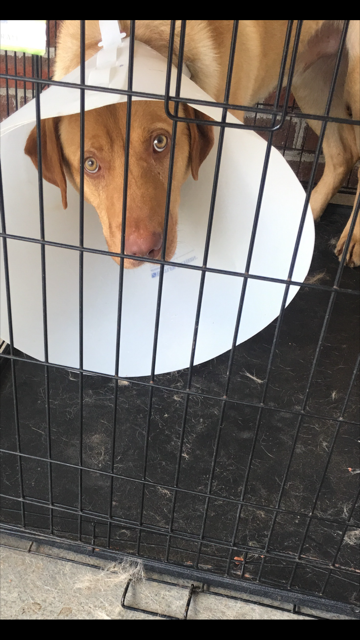 Banjo is my family’s 18-month-old yellow Lab. If he can be summed up in one word, it’s exuberant. If two words – wildly exuberant. He is a force to be reckoned with, ninety-one pounds of raw energy barreling toward us at top speed in hopes of 1) eating something or 2) having us throw a ball or stick for him to retrieve. Endlessly. Banjo goes into a frenzy if he thinks we’re about to stop throwing said ball or stick, the bodily equivalent of shouting NONONONONOPLEASEPLEASEPLEASEPLEASE!!!! His beautiful gold-green eyes (sky-blue when he was a baby) go pink around the rims; he often leaves us humans coated in a layer of frothy slobber, prompting us to quote Bill Murray’s line to Dan Aykroyd in Ghostbusters: “He slimed me.”

During attempted walks on the leash (key word: attempted – these walks are more like trying to restrain a steam locomotive), Banjo’s mouth foams to the point of looking rabid, unnerving to anyone who might recall a certain story about a big yellow dog exposed to hydrophobia. I mentally push this horrible connection away the instant it comes to mind. Managing Banjo has become something of a Herculean challenge, to say the least. Twice he’s escaped from us, running, barking and foaming, through our neighborhood, causing one woman to run into her house and giving young men chase. I corralled him once myself and got him safely to our fenced backyard. The other time my older son chased him for forty-five minutes, while Banjo had the time of his life ripping through neighbor’s yards and swimming in the pond across the street from our house. In disgust, my son gave up and stormed home, at which point Banjo, sopping with pond water, bounded back up the driveway.

Banjo escaped from the backyard recently, having dislodged two slats of the wooden fence by repeatedly jumping against them with his considerable weight. Looking at the slats, presently secured with bungee cords until we can nail them back properly, my husband said, “If we can’t contain him, we’re not going to be able to keep him.”

Despite all, I love this wildly exuberant dog. He’s been with us since he was seven weeks old, a ball of yellow fuzz that slept in my lap or on my feet. Banjo’s presence represents hope and survival, his own as well as my husband’s during a dark time;  I wrote about it in The unplanned baby. How can I just give him up? Yes, he’s one giant mess. Sure, he sheds copiously, enough hair to make a whole other dog. Yes, he dug up the pipe leading from the propane tank by the back deck until the stench of gas frightened us all, giving us visions of the whole place blowing at any moment, until we buried the pipe again and built a small wall of cinder blocks around it. Banjo barked at these blocks nonstop, all day, every day, for about a month.

But when he goes into his crate at night, he looks at me with those golden-green eyes and waits patiently for me to reach through and rub him for a minute. When I do, he leans his head against my hand, closes his eyes, and savors every second – the sweetest, most loving of creatures.

It was inevitable, of course, and past time, really. It had to be done.

We took Banjo to be neutered.

We did not know until we picked him up that he’d be wearing a cone to keep him from interfering with his surgery site until it healed – for seven days.

“There’s no way,” I said, watching Banjo writhing, twisting, and jumping, trying to rid himself of this horrid thing around his head. But after a few minutes, he sat still, with his head hanging down. Subjugated, submissive, maybe even dejected, Banjo seemed to be contemplating this new, unfortunate turn of events.

In the subsequent days, he simply made the necessary adjustments.

He learned that he had to put the entire cone opening over his food and water bowl to eat and drink. I laughed at the sight. He looked like something straight out of science fiction, a vacuum-headed suction creature from another planet. He ran through the backyard, as exuberant as ever, with his cone pointed toward the sky like a morning-glory flower. He wanted to play so badly that, despite the cone, he managed to drag a five-foot pine limb thicker than my arm to me in hopes that I’d throw it for him.

He still waited for me to rub his head when he went into his crate to sleep.

“I am so sorry about all of this, Banjo,” I said, working my hand through the bars and past the cone.

He shifted his head to help me reach him, leaned against my hand, and closed his eyes. So accepting and forgiving.

I rubbed him an extra-long time, tears stinging my own eyes.

My husband and I took the cone off after four days. We couldn’t stand it anymore.

Banjo is healed now, running unfettered again in the backyard each day of this glorious, sunny spring. He never fails to lift my spirits, this big, beautiful, messy boy. He reminds me that setbacks are temporary, that whatever pain and hardships come, there’s something good waiting just on the other side. Accept, make the necessary adjustments, carry on – cheerfully.

Just another of life’s lessons from an exuberant yellow dog that will hopefully be calmer now.

Regardless, here’s the truth about Banjo: He doesn’t belong to me. I belong to him.

Reflection: What are the necessary adjustments must you make in your own life, currently? Think acceptance, forgiveness, healing, moving beyond. What’s the something better that might be waiting on the other side of the struggle, the pain? Write your truths.