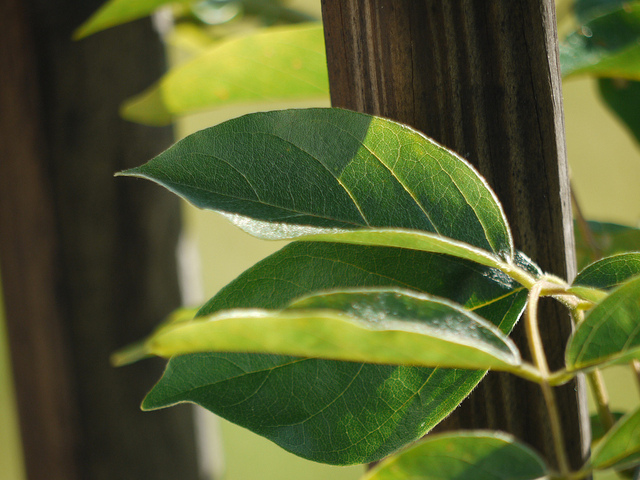 I recently posted the first part of a short story about a real wisteria vine that grows in an old, forgotten place. Forgotten people are buried there. An article about plants having memories made me wonder what this hardy old vine may have witnessed in its long lifetime . . . here’s Part One , if you’re interested, in which the vine relates how it mysteriously sprouted, took note of its surroundings, and had its life saved by a little girl, Jennie Jay, and her mother. It was the beginning, shall we say, of a very curious friendship.

Here’s Part Two. The vine has lain dormant during its first winter . . .

I awoke to a gentle sun and delicious, cool dew. I felt new greenness coming on, so I spread what there was of myself.  I was bigger, definitely bigger. Several days went by before I realized how much time had passed while I slept. A whole season, it seemed. For one thing, the cow had a calf.

For another, Mr. Griffin had a Mrs. Griffin.

As they planted the garden together, I learned her given name, Rachel, and that she came from Up The Swamp. She must’ve already bloomed, as her fruit was showing right in her middle. I wondered how the fruit would transform into a miniature human like Jennie Jay; did new humans burst forth from pods fully formed like that, or did they just drop off? The fruit kept growing but apparently never ripening. Something taking that long to grow surely could not be healthy.

Finally, near harvest time, Mrs. Griffin shut herself in the house with other female humans. Mr. Griffin scoured his garden for the last of the beans, peered at his pumpkins, sighed, repeated the meaningless motions and hoed, although nary a weed was to be found.

He didn’t see the door when it opened, didn’t see Aurelia Mixon until she called, You’ve a fine son, Thomas! Squalling his very lungs out! Come and see him, Papa.

Mr. Griffin’s face glowed like the risen sun, but I considered myself cheated not to have witnessed the human fruit falling.

The seasons cycled and cycled again before Jennie Jay came back to me.

I knew her at once. She’d grown. A lot. I’d grown, too. I no longer needed a cage. Mr. Griffin hadn’t built an arbor for me so I squatted instead of standing upright, but my trunk was decidedly thicker.

By this time there were three little Griffins, one in his Mama’s arms and two hanging from her skirt as she went partway up the Mixon road to meet Jennie Jay, who trudged along wearing a straw hat tied with a wide yellow ribbon. She dragged a curious bag behind her, making a noise like Mr. Griffin’s beagle pup when it got its back leg stuck in the fork of the grapevine.

Mrs. Griffin’s face looked ominous, like storm clouds gathering. Heavens, what a fuss, Jennie Jay. Quit that howling and pick up that valise. You’re getting it filthy. Come on and I’ll fix you a bite to eat.

Your Mama wouldn’t like that. Say ‘I’m not hungry, thank you.’

What a stubborn little cuss you are. No matter. You’ll do what you’re told until your Papa gets over this diphtheria and you can go back home.

She can’t come, she’s tending to your Papa. Besides, you can play with Tommy and Molly; I’m sure you’ll all have a big time together, now won’t you?

They made it to the house but Jennie Jay didn’t stay inside long. Within minutes, the door flew open and she ran as hard as she could toward the garden. She flung herself down so close to me that if a stiff breeze blew, I might bend just enough to touch her. A drop or two of the water flowing from her eyes seeped into the earth, to my underparts. The taste surprised me: humans are remarkably salty.

Mr. Griffin drove up in a cart pulled by one of his more pleasant mules. He saw Jennie Jay, called Whoa, hopped down.

She paid him no attention. She continued dripping.

He knelt beside her. Tell me what’s the matter.

I want to go hoooommmme!

I know you do. I know your Papa and Mama are missing you as much as you miss them. But your Papa has to get well first. He wouldn’t want you to get sick too, would he?

Jennie Jay sat up and wiped her face, leaving smears of earth.  She shook her head.

It’ll be all right, Jennie. Don’t cry, now. Want to know something?

See that vine there?

Mr. Griffin pointed to me.

Yes. Know what that is?

Jennie regarded me thoughtfully. She shook her head.

It’s wisteria. Once when you were very small you got away from your Mama and came here to pick every last one of my dandelions. We found you here by this vine. I didn’t even know it had sprung up. I aimed to yank it right out of the ground but your mama said no, let it be, on account of you called it by name and that was your first word.

It was?  A flicker of recollection crossed her face.

It sure was. I witnessed it myself. You didn’t start with something easy, no sirree; you had to go and try to say ‘wisteria.’ It came out something like ‘siria’ or ‘siwia.’

Jennie giggled. The dripping had ceased.

Your mama said I ought to make an arbor here, so this vine could grow and grow. It might even bloom one day, Jennie Jay, with flowers hanging all over.

It just might. Of course I have to build the arbor first, and see, the trouble is, I ain’t had anyone to help me.

Well then, let’s get started.

Mr. Griffin held out his hand and helped Jennie Jay to her feet. She stared up at him with shining periwinkle eyes.

Mr. Thomas, will them wisteria flowers be yellow?

Reckon that will be all right, Jennie Jay?

Mr. Griffin unhitched his mule and off the three of them went toward the barns, Jennie Jay skipping, Mr. Griffin smiling, the mule laying its ears back, looking altogether like Mrs. Griffin at the doorway.

As for me, I vowed that, whenever I finally bloomed, my blossoms would be yellow.