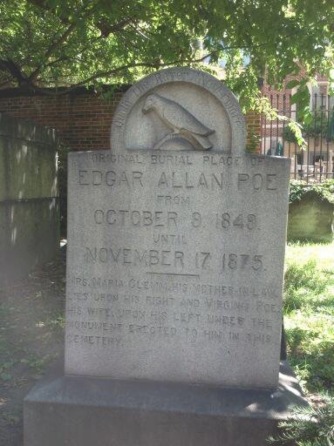 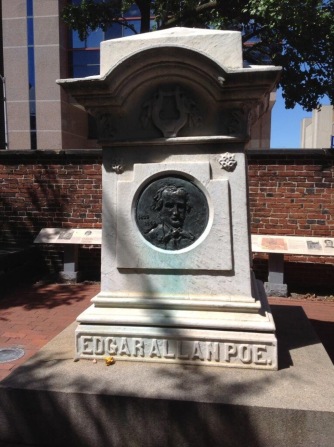 My older son and I, teachers inspired by a love of The Great Gatsby,  celebrated the arrival of summer vacation by driving from North Carolina to Rockville, Maryland, where we visited the grave of F. Scott Fitzgerald. Having accomplished this mission before nine o’clock in the morning, my son asked: “What do you want to do now?”

“You know,” I grinned, “Baltimore is only forty-five minutes away. Poe is buried there.”

Thus was our Dead Writers Tour born. Off to Baltimore we went.

In contrast to a midnight dreary, the morning sun was blinding at the Westminster Hall and Burying Ground. The old Gothic-Revival church, the gate, the trees, the headstones, all cast the blackest, sharp-edged shadows, as if intentionally evoking the last lines of  “The Raven”:

And the lamp-light o’er him streaming throws his shadow on the floor;

Shall be lifted – nevermore!

And there, to the immediate right of the entrance, was the author’s grave under a large, shadowy monument bearing a plaque with his likeness. One wilting yellow rose and a couple of little rocks rested on the base.

Poe is buried with his wife, who was also his cousin, aged thirteen when he married her and twenty-four when she died, and her mother, his aunt.

“This isn’t the original grave,” my son pointed out. “Poe was first buried somewhere behind the church. He was moved here to to the front later.”

“That figures,” I said. “The man was unsettled for most of his life. He couldn’t even be settled in death.”

Just then a black bird flew by to land on another headstone, where it sat watching us from the stark shadows.

“Is that a raven?” I whispered.

This cemetery is old, dating from the late 1700s. The pathway from the entrance to the back is narrow,  leading past massive domed slabs somewhat reminiscent of Quonset huts. Years and weather have left black streaks running down the sides of these burial slabs to form odd swirls and patterns. Ghostly patterns, painted by nature’s fingers.

“Check out this stain,” I said, pausing. “Does it look like a skull to you?”

Rounding the corner of the church, we came upon a marble table with thick legs and a top so sunken in the middle that it seemed impossible for such a heavy substance. A plaque informed us that this “gravity-defying” monument was mentioned in a Ripley’s Believe It or Not! article. A Revolutionary War veteran is buried beneath this oddity.

From there, my son and I could see Poe’s original grave, as the crowned headstone is embossed with a raven. On nearing the cenotaph – the empty tomb – the words arching above the bird become visible: “Quoth the Raven – Nevermore.” The stone informs visitors that Poe rested in this spot from 1849 to 1875.

“Do you remember reading about the mysterious person who showed up every year on Poe’s birthday, wearing a cloak or something, to leave roses at the grave?” I asked my son, a trivia expert extraordinaire.

“Oh, right – the Poe Toaster. He wore a hat and white scarf. He left cognac, too.”

“At this marker or the other?” I wondered.

“This one, I think. He came for decades, until just a couple of years ago. No one ever figured out who the Toaster was.”

“That’s hard to believe, in this day and age.”

“What’s really strange is that just before Poe died, he was found in the streets of Baltimore, out of his mind, wearing someone else’s clothes, and no one ever knew why.”

“It’s haunting, but mostly sad,” I pondered aloud. “Something straight out of his own work.”

We turned to leave, walking past a line of eroding tombs and vaults on the far side of the little cemetery. Some stone vaults had iron closures that appeared damaged. My fanciful imagination took flight: Had someone tampered with the doors, trying to get in – or out?

I shuddered despite the brightness of the day, recalling something my grandmother told me when I was a child afraid of the tiny graveyard across from her house in the country: Never fear the dead. Fear the living.

We simultaneously picked up our pace toward the exit.

Back at Poe’s final resting place by the gate, my thoughts turned to his poetry, the glorious rhythm of “The Raven,” which drew me as a child the first time I heard Vincent Price reading it on TV. The poem wields mesmerizing, unique power. It is meant to be read aloud. Once when I was working to help third graders comprehend a text they were reading, we encountered the word raven.

“What’s a raven?” they wanted to know.

“Read it to us!” demanded the kids.

After a quick Internet search, I read the opening stanzas.

The children listened, spellbound. When I stopped, one of them sighed:

Ever after, the kids greeted me with “Hi, Mrs. Haley! Once upon a midnight dreary, while I pondered, weak and weary!”

Having paid my respects at last to Edgar Allan Poe, I walked back through the gate, just as the church’s bells began striking eleven – as if the word master himself was sending a message:

In a happy Runic rhyme,

To the rolling of the the bells —

To the tolling of the bells,

To the moaning and groaning of the bells.

It couldn’t be coincidence – could it?

Today is the 167th anniversary of Poe’s death.

Reflect: What written works sing in your head, call to you, haunt you? Why?