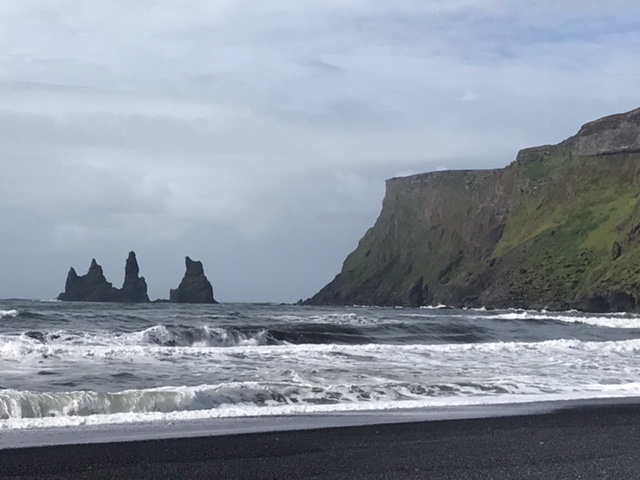 The breaking of the wave cannot explain the whole sea. – Vladimir Nabokov

My older son toured Iceland this week, capturing his own abiding images of the exotic landscape.

We struggled to find adequate words for encapsulating the stunning scenery.

Desolate. Windswept. Wistful. These drifted in and out of my thoughts when viewing the photos, although they were a shade off, a tad too dark, didn’t have the exact right feel, weren’t sufficient. Uncaptured words, like elusive, shadowy birds, circled round my mind, never quite touching down.

It’s like being on another planet, my son texted.

Ethereal, I texted back, almost happy with that word, as it’s one I love and it almost fit.

My son nailed it.

He was, after all, the one there taking it all in.

Land of legend and lore, glaciers and volcanoes, sharp contrasts and starkness, sparse, picturesque villages, moody skies and morning mists, Iceland is mythical. Not in the sense of Avalon and Atlantis, for one can actually stand at the volcano’s edge or scoop up handfuls of the black sand at the beach, really tiny pebbles of basalt. The whipping wind, the rocky coast, the crashing waves – the Vikings would recognize these still.

It looks like something out of Tolkien or the Chronicles of Narnia, said my son.

Experiencing Iceland vicariously, I did what I always do when I wonder about things – I looked them up (until this moment, I hadn’t thought that looking things up might count as a hobby; I am saying it’s mine, the next time I’m asked). There in the Internet’s vast sea of words, the facts have as magnetic a pull as the legends.

On the southern tip of Iceland, where my son stood on the black sand looking out at the craggy basalt sea stacks, the ocean is unimpeded all the way to Antarctica – there is no land mass in between. Hence the Atlantic rollers – long, powerful waves – can attack this shore with ferocity. I envision the sea drawing itself back as far as it wants, like a pitcher winding up for a fastball. Treacherous, even deadly (local legend features sea trolls and shipwrecks), there’s yet something lyrical, spiritual, about the wild freedom of the ocean at this point on the globe.

The Earth is mostly water; we are mostly water. 71% of Earth is covered by water; there’s 73% water in the human brain and heart. The ocean’s inspirational pull on us may be that simple – like recognizing like. We see the beauty and the power of the sea and something stirs deep within us – humans have waxed poetic about the ocean from time immemorial.

The thing that draws me most about this particular spot, the fascinating black beach at the village of Vik on the southernmost tip of Iceland, is knowing the ocean is unhindered here, from the shore at the uppermost part of the world to the lowest. The vast freedom, the power. The creative force. It draws me as a writer, as a teacher, as a human. That we are capable of great destruction is an understatement – but that’s not where I am going. From our entry into the world to our exit, there’s not a time we aren’t hindered by obstacles, both physical or metaphysical, taking their tolls on our bodies, minds, hearts, spirits. It’s astonishing how we are inspired to carry on, unfathomable how the smallest of things can be the source of willing ourselves onward – we flow over, around, through what would hold us back, finding peace despite what looms, ever how great, in our paths. As with the ocean, humankind has waxed pretty eloquently, deeply, about trouble, trials and pain. It’s a shared experience; none of us is unmarked. The difference is how we make our way, individually.

To be truly unleashed and still live seems an impossibility, so I ponder the power of unhindered inspiration – the indomitable force that would be. What heights, what depths, what creativity. Ultimate constructive power, unlimited possibility.

If such energy were harnessable . . . well, that’s the stuff superheroes and sagas are made of.

I tap into it as much as I am able, and let it flow on – one grateful conduit of ideas, images, and meaning, in my little part of the boundless, surging sea. 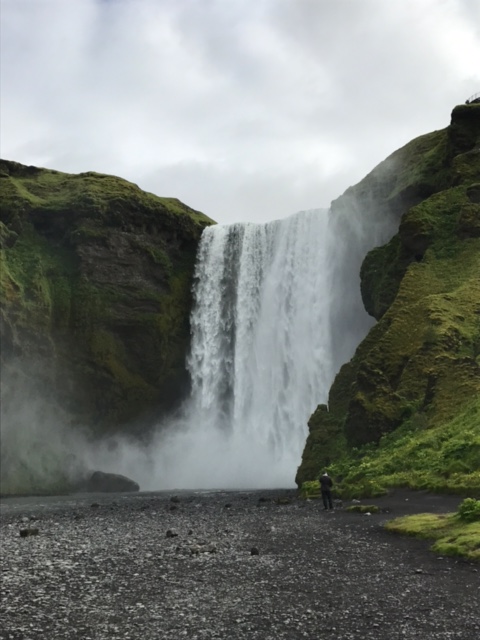 Skógafoss, a waterfall in southern Iceland at the former coastline.

Note: Prior to writing this post, I had been toying with a piece about an enchanting encounter on a beach much closer to home. The titles of these posts are deliberate plays on one another, attempts at capturing the essence of place: Mystical morning.

© Fran Haley and litbitsandpieces.com, 2016. Unauthorized use and/or duplication of this material without express and written permission from this site’s author and/or owner is strictly prohibited. Excerpts and links may be used, provided that full and clear credit is given to Fran Haley and litbitsandpieces.com with appropriate and specific direction to the original content.
%d bloggers like this: